I'll be using this blog as a place to capture this design that has taken shape over the last few weeks. The purpose here is to document where it came from, why it's relevant and useful, and how you might use it yourself or spread it out into the world for others.

This simple tool is used to improve the delivery of inhaled steroids to the esophagus in the treatment of Eosinophilic Esophagitis. For those that don't know about EoE and want a bit of background, read on in this post where I will provide a brief history and the state of affairs in the form of a whitepaper. For those that know about it and simply interested in the adapter device itself, skip to the subsequent blogs.

Eosinophilic disorders are a class of autoimmune conditions in which a type of white blood cell called eosinophil causes localized irritation, swelling, discomfort, and potentially serious complications in certain tissues. These are often gastrointestinal disorders (EGIDs) affecting the esophagus, stomach, and intestines, and are considered chronic once diagnosed. The incidence of these disorders is sharply on the rise with some estimates that approximately 1% of the developed world is affected, e.g. up to 3 million people in the United States.

Eosinophilic Esophagitis (EoE) is a condition that occurs when eosinophils cause swelling in the esophagus for a variety of causes, often cumulative in effect. The swelling may also be accompanied by irritation, burning sensations, itching, and pain. If left untreated, the swelling causes significant narrowing and scarring of the esophageal tissue, which can lead to food becoming stuck and unable to pass. This is called food impaction and may require emergency medical intervention, and when occurring chronically, may lead to the inability of the patient to eat solid food entirely.  EoE is estimated to affect up to 50 in 100,000 people (0.05%), or approximately 150,000 people in the US. While it affects both children and adults, it is most often diagnosed in middle aged men. 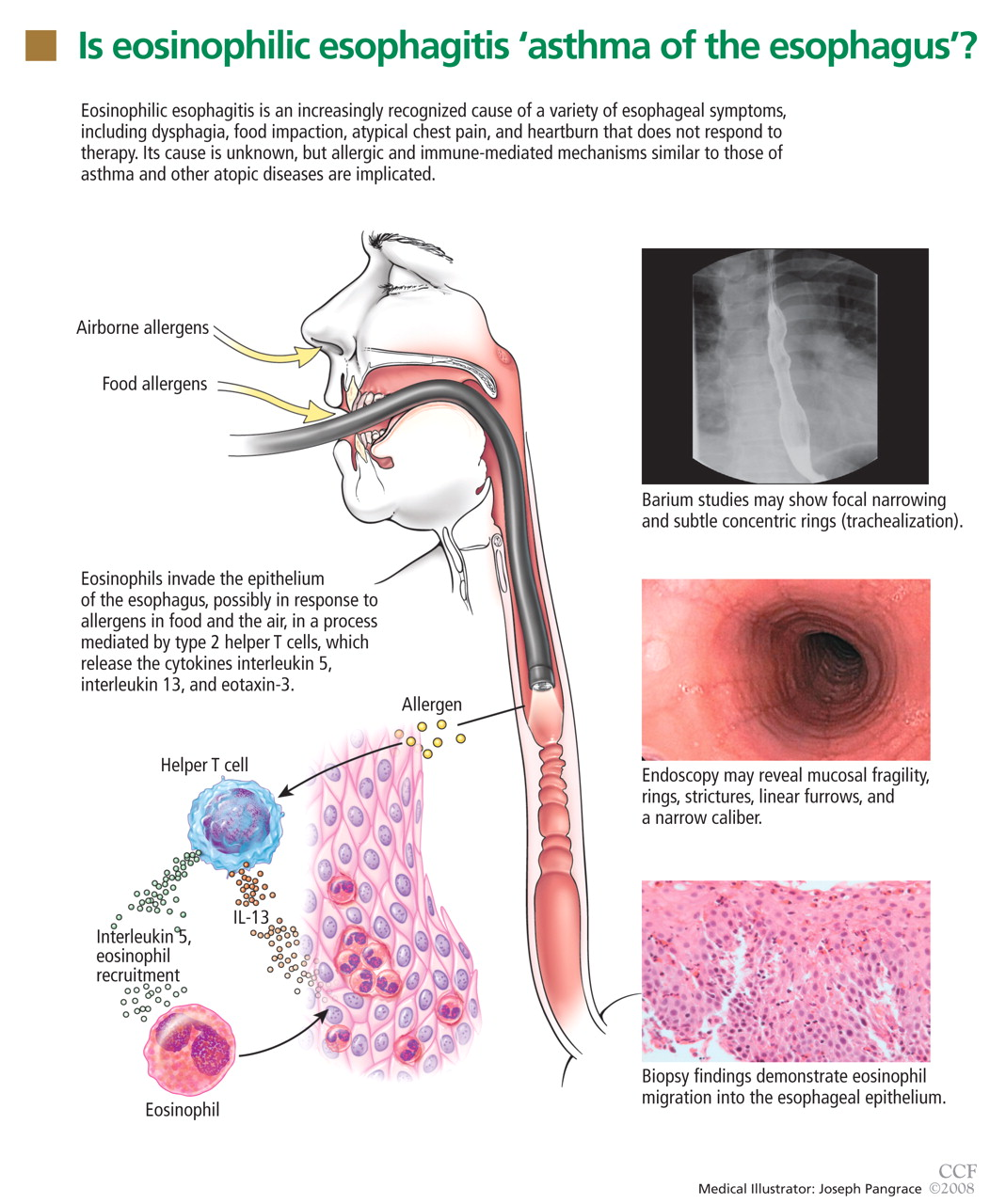 EoE is especially correlated with other atopic conditions including allergic rhinitus, sinusitis, post nasal drip, and asthma. In children, it is thought that environmental triggers have more causal influence, such as pollen, mold, and dustmites. In adults, late onset EoE is thought to be more related to food allergy or intolerance. Up to 25% of adults will show some allergy to a food that, when the food is avoided, causes significant remission of their symptoms. Patients without a testable food allergy by skin prick testing or blood testing may still have food intolerances where the nerve endings are irritated by certain food chemicals. This irritation of the nerves mimics an allergic reaction in that it causes eosinophils to flock to the site, leading to symptoms. While not strictly an atopic (allergic) reaction and therefore not treatable by antihistamine therapy, the end result is the same.

EoE (and most other eosinophilic gastrointestinal disorders) are a new class of pathology, only recognized since the mid 1990s. This is mainly due to the mistaking of EoE symptoms as being those of gastric reflux disease (GERD), possibly because the proton pump inhibitor treatment for GERD does have some significant benefit for many EoE sufferers. The exact mechanism of this is subject to debate and research, with some theories noting that even very mild, asymptomatic reflux could cause enough nerve irritation to the esophagus to rally the eosinophils in combination with the other environmental and food triggers. Removal of the acid via PPI treatment can be enough to bring the patient under the symptomatic threshold temporarily or for long term, but severe esophageal damage and stricturing can still be occurring without symptoms due to the other allergens and intolerances.

Recognition of the multi-causal, cumulative nature of these disorders is only recent within the last 10 years or so. The incidence of the disorder is rising by all accounts alongside the increased incidence of allergic disorders in general. There is also significant research into the mechanism of food intolerance, with specific attention to the roles of salicylates (main ingredient of aspirin), amines, and glutamates. These common chemicals found in many foods are known to increase eosinophil response in many patients, with some being sensitive to one or multiple chemicals.

Severe cases of EoE lead to strict elimination or elemental diets. Some patients cannot pass more than very simple foods through their esophagus, such as rice or potato. In these cases, they are often an elemental formula orally or via feeding tube.

There are no FDA-approved or universally recognised treatments for EoE. Treatment tactics depend on severity of symptoms and the suspected or proven causes. They also vary widely based on the familiarity of the treating physicians with the disease, as being a newer pathology, it is not widely understood and often requires multiple referrals.

As EoE is a cumulative disorder with multiple causal triggers, the best treatment approaches are wholistic and eliminate or mitigate as many triggers as possible. The elimination of environmental triggers such as mold, dust, pollen, and dustmites can be impossible but should be minimised.

Food triggers should be evaluated by allergy testing. Standard skin prick and blood tests may not turn up all atopic responses, but immunoglobulin tests can be performed with higher accuracy. However, these are costly and the merits of their value in an overall treatment plan are debated.

An elimination diet can be used to restrict all known triggers for a time until the symptoms abide. Then “food challenges” are introduced that test the reaction of the patient to sequential reintroduction of the known triggers. Once known, these triggers can be eliminated for the diet for symptom control.

Still many patients are either unsuccessful in maintaining the elimination diet, cannot completely identify enough causes, or have severe symptoms that require additional controls. This is especially true in children, where diet control may not be as easy for long term nutrition and development, and due to compliance challenges of the patient. Also, some doctors choose to bypass trigger control and elimination diet entirely due to unfamiliarity with the pathology and comfort with pharmaceutical intervention as a first line treatment.

These patients are typically assigned steroids in one of two forms. The most popular is to swallow the steroid spray from a measured-dose inhaler (MDI). Flovent is the medication of choice (reason unknown) but others may also be used. These MDIs are typically used to deliver inhaled steroid for asthma treatment. To administer for EoE, the user holds their breath and sprays the steroid mist into their mouth, and then ‘dry-swallows’ it. For all swallowed steroid treatments, patients are advised not to eat or drink for 30 minutes. Common side effects include localised thrush in the mouth, tongue, throat, or esophagus and systematic side effects such as mood changes, irritability, depression, and fatigue. These latter side effects are the main reason that systematic steroid therapy is considered inappropriate except for extreme cases.

The latest recommendations for Flovent therapy can be seen here http://www.uptodate.com/contents/treatment-of-eosinophilic-esophagitis :

“The optimal dose has not been established. Our approach is based upon the patient's age:

As noted, dry swallowing of Flovent is considered effective, generally safe, and with minmal side effects, the main one being dry mouth. Other side effects of oral and esophageal thrush, and oral sores are not uncommon but generally tolerated by patients.

It’s noted that the active drug (fluticasone) in Flovent is the same as in Flonase nasal spray (now in generic form) but the dosages are very different. Each 100mcg spray of Flonase or equivalent delivers 50mcg of fluticasone. As seen above, this is less than 25% of the adult inhaler dose of one spray, which is prescribed at four sprays per day. Therefore, an adult would require 16 sprays of Flonase per day. This is prohibitive for patient compliance, and also likely that the non-viscous fluid would mostly be swallowed anyway, causing most of the drug to be washed to the stomach. The higher concentration of drug delivered from the MDI is required for effective treatment.

Administration of Flovent via MDIs has three inherent disadvantages. 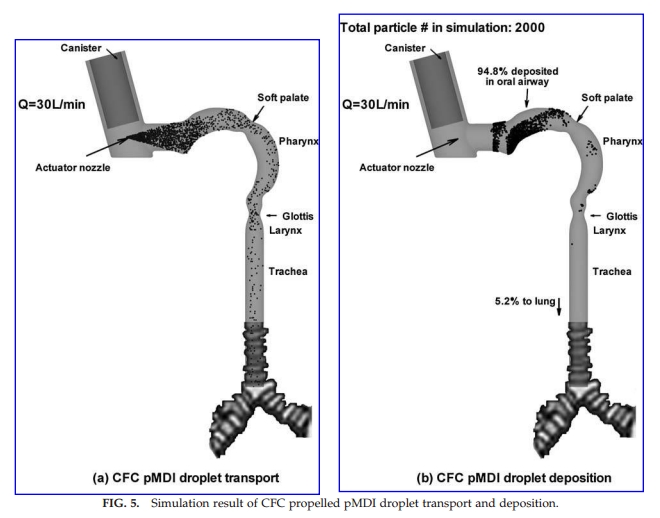 Note from the CFD analysis above, the standard MDI dose is highly ineffective at delivery to the lungs as intended. This is why the use of a “spacer” is often recommended for people with severe symptoms requiring higher dose of drug, and for children who have trouble inhaling in synchronous time with the inhaler spray.

It is clear that standard MDI designs intended for asthma medication delivery are not optimal for drug delivery to the esophagus. Delivery of steroid through the mouth for swallowing into the esophagus is suboptimal due to complications such as dry mouth and oral thrust, and inefficient drug delivery leading to higher than necessary dose. The design of a purpose-built drug delivery system to the esophagus that can be easily used and tolerated by both adults and children is highly desired and would be valuable to EoE patients, and possibly patients with other esophageal disorders requiring localized steroids or other drugs.

I created a prototype in CAD and rendered it for 3D printing. It was printed using food grade PLA to allow for some level of biocompatibility and minimization of plasticizers. This will however reduce long term reliability compared to ABS.  Ideally, high durometer PBax or other medical grade plastic could be used. The adapter is tapered slightly and fits into the mouthpiece of the inhaler. It does not lock in place and simply relies on light pressure fit.

A variety of different taper amounts and lengths were trialed and tested based on a standardised model of the mouth and pharynx.

The prototype was easily and quickly manufactured on a standard benchtop 3D printer and lightly sanded to fit snugly in the mouthpiece of the MDI.

Testing was performed on a cross-sectional model of a standard young adult esophagus. The model was 3D printed in black ABS plastic in order to show contrast of the steroid as it was sprayed. Testing was done by hand and is summarized in the following video. You can see that without the adapter, a significant portion of spray lands on the tongue unless great care is taken.  By using the adapter, the tongue is bypassed and all of the spray lands on the back of the throat.

Future improvements would involve optimizing the length and shape for children of different ages, creating models for other inhaler types, and optimizing the printing method.